One of my favorite models of all time. Although I’m always actively searching for these, I only get in one per year on the average. This one is nice, although it had a Bigsby and pickguard at some point. We have lacquered over the 6 screw holes so you can’t feel them, although it’s noticeable upon close inspection. The Esprit was the predecessor to the Robben Ford Signature Model, which was basically the same guitar in a custom shop version (pic of Robben with Esprit Ultra). Fender had been trying to steal a portion of Gibson’s market for many years, namely a guitar with dual humbuckers on a double-cutaway body; guitars like the Coronado, Wildwood, Starcaster, etc. In the early/mid-80’s Fender’s effort was the “Master Series”, which included the semi-solidbody Flame and Esprit, and the D’Aquisto hollowbodies, all having with 3 models in each line (Standard, Elite, & Ultra), differing by hardware and cosmetic appointments. The Esprit, was basically identical to the Flame but in a slightly larger (14″ vs. 13″) symmetrical body (Flame was slightly asymmetrical). The Standard was the base model with single ply body binding, neck and headstock binding, simple Les Paul style controls (dual hums, dual Vol-tone, 3-way), dot inlays, rosewood fretboard, metal tuner buttons, and an excellent “three-axis” (including side-to-side spacing) Schaller tuneomatic bridge and stopbar tailpiece. Other features of the Esprit Standard include tone-chambered Alder body with carved maple top and set-neck, 3-pc maple neck with rosewood fretboard, 24 3/4″ scale (same as Gibson), flat 12″ radius, an special Schaller humbuckers. The tone chambered body was credited with the Esprit’s traditional archtop top, with none of the feedback problems of F-hole type guitars, but the same resonance and sustain–and fuller, rounder tone. The Schaller humbuckers feature different spacing for neck and bridge. The Master Series had a brief run, with the Esprit officially produced from ca. ’84 to ’86 but actual production run was less than 2 years. Total production for this model is said to be only around 4,000 units. Here’s a good site for the Master Series (link) with a lot of info on all of the models. Serial number info for the B/C/E serials is sketchy, but my guess is that they’re in the later part of the run, i.e. 1985. The only mod I’m aware of is the tailpiece which had been replaced with a stopbar in place of the Schaller slotted type. It has Gibson strap pins but we will switch to original Schaller locking type upon request. Other than the finished over screw holes, the top is quite nice. The back has buckle wear, nearly all of which is in the clear coat. Frets are in nice shape and the set up is superb. Strings are slotted low at the nut and the action stays low all the way up the neck. The neck, as shown above, has some lovely flame in it. Not spec for this model, just a cool accident. Esprit’s have become highly prized due to their rarity and the fact that they’re great guitars, with clean examples going $1500 and up, and a lot of guys trying to get that for well-worn examples. Get this one for just $999, including original case which are even harder to come by since Fender shipped these without case for the later part of the run. 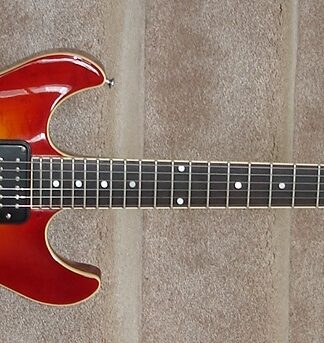