Another great HM in an even rarer single humbucker configuration. While I’ve had a half-dozen of the HS shown below, I’ve only had two other of this 1HB model. This one has a few mods including replacement Gotoh tuners, chrome Kahler tremolo with black saddle blocks, large Jackson strap pins, metal chrome pickup ring, replacement but very similar knobs and, most notably, a Suhr SSH+ bridge humbucker (link). You’ll also notice some custom graphics. Pro-finished black/yellow checkerboard “pickguard” (which actually is NOT a pickguard), with matching checkerboard in the forearm area, wrapping around to the top/back edge. The graphic is well done and they’ve even done a nice job airbrushing some pickguard screws. All other specs are basically like the HM HS below. The Suhr pickup is a major upgrade over the stock DiMarzio and it’s multi-conductor, wired into the mini 3-way switch for 3 cool tones (single, humbucker series, humbucker parallel). Cosmetically it’s not mint but overall very nice shape and I’m having Martin spend some bench time with it getting it as nice as possible. Set up is low with no issues. This is one of the coolest HM’s I’ve had and I’m happy to offer it for $750 with a later-era Fender hardshell case. 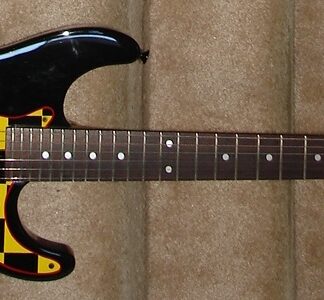