There’s very little info on the web or in my books about this guitar other than Gruhn’s book calls it an “Electar F-Hole Flattop (model name unknown)” and another sources indicated that it’s possibly called an “Electar Model C”.  Certain features, and Gruhn’s book, date this to ca. ’38, while provide.net dates it to a 1941.  I think there’s more weight dating it to ca. ’38.   It’s a rather unique, important instrument, Epiphone’s first electric and one of the earliest electric guitars made.  Although they made a number of lap steels under the Electar brand, it was their Spanish style guitars like this one, designed by Herb Sunshine, was technically superior to others.  Thanks largely to the tone control systems and, primarily, pickup design, these aren’t primitive guitars at all, with a sound that’s not unlike hollowbody guitars built decades later.  Many of the competing pickups were the “horseshoe” type, used by Rickenbacker and others and Epi even used the Horseshoe on some other models.  As you can see in this picture, the pickup was a massive bent steel design, curved at the top to rest parallel to the strings and inline with the fretboard, surrounded by a long oval bobbin, capped with a black cover.  Some interesting history regarding pickups in this era.  You’ll notice the Miessner Inventions Inc. plate on the back of the headstock.  While everybody was working on various pickup designs in the early-mid 30’s, Miessner’s patents on designs to make a guitar louder were used as threats to every electric guitar maker, demanding that they pay a licensing fee for any guitar that used a pickup, generally, any device used to make a guitar louder.  Their bluff worked with Epiphone, Kay, and Vega, while other companies like National Dobro, Gibson, and Electro String/Rickenbacker banded together to challenge Miessner. Rickenbacker even had a earlier patent on their Frying Pan guitar!  Miessner backed off as it was too expensive to challenge them in courts.  Anyhow, some interesting history if you want to look around the web.  Features of this model include laminated maple body with 13 3/8″ lower bout, flat top and back, 25.5″ scale, 1 9/16″ nut width, blade pickup in oblong housing, bound top and back, unbound neck with rosewood fretboard, body with rear plate for access to pickup and electronics, trapeze tailpiece with impressed “Epiphone” logo, black octagonal pointer knobs, dot inlays, originally finished in sunburst.  Note the Brazilian rosewood fretboard that extends past the body in traditional archtop fashion.  Rosewood bridge has a flat bottom to conform to the flat top and is original. Tuners are Kluson Deluxe and are not original and the pickup had low output so it was rewound by Kent Armstrong to the typical lower output of guitars of the era.  Obviously, the sunburst finish was removed and the guitar sports a thin finish, possibly shellac.  We suspect that it originally had an Electar logo plate but as they’re impossible to find, we installed an Epi plate of the type used in the 30’s.  The tone knob is located very close to the tailpiece but other Electars from this era have the same unusual location.  This guitar was far from playable when it came in but Martin did a great job restoring it, including binding work, cleaning up the frets, reconditioning the fretboard, and some real tech magic making this a wonderful playing guitar.  The binding is tight all around, with just four tiny gaps, and a 1 1/2″ piece that was replaced.  Its small body carries a full scale, in fact, a 25.5″ scale (Fender!) in a body size that’s around the same as a Les Paul.  This guitar is a lot of fun to play and it has a cool, honky tone that lends itself to delta blues or early jazz.  Electronics work perfectly and it’s a solid guitar, with no breaks or repairs.  For an imminently playable pre-war electric with lots of history, I think it’s a great deal at $1299. 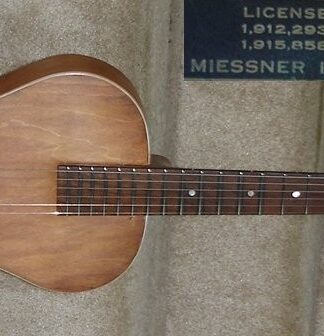