Made during the early part of the folk boom in the 60’s, the B-25-12 is appointed like a student model with dot inlays and no ornamentation on the headstock, and unbound neck, although it does have a double-bound body. Not surprisingly, my tech commented that was a great sounding folk instrument. The B25-12 is a 00-size small bodied (14 1/2″ lower bout) Gibson flattop, with a solid Spruce top, solid mahogany back, and laminated sides. Other features include multi-ply binding on top, bound back, ebony bridge, long tortoise pickguard, 2″ nut width, 24 3/4″ scale, and Kluson strip tuners. This one has seen an average amount of playing time I would guess, but was taken care of by previous owners. The only glaring flaw is a small chip out of the front corner of the headstock (shown here). It does indeed look like a 55+ year-old guitar with plenty of finish checking and a slightly dull finish which we can buff out at no cost – but no cracks or repairs. The tone is just what you’d expect from a small Mahogany body – very warm tone with plenty of mid-range – but surprisingly crisp and bright. It’s a fun guitar to play, especially comfortable when sitting around the living room and like an old parlor guitar, doesn’t look out of place with the decor. Later in the 60’s Gibson went to a small bridge with a trapeze tailpiece but this is the more desirable model with standard bridge with acoustic string pins. The only non-original aspect of this guitar is a replacement bridge, but it’s the proper belly bridge – plus a compensated saddle replaces the wooden one. Most of the bridges from this era look identical, but have adjustment screws for the saddle height, plus 2 pearloid plugs that cover the hold-down screws that Gibson used on their bridges (I’ve never figured out why Gibson couldn’t glue down their bridges properly without the use of these screws.) Since most players accuse the stock adjustable bridge in this era as being a “tone robber”, it wasn’t uncommon for players to do away with this feature. Bottom line though, is this guitar is plenty loud with good sustain, and that may be in part due to the removal of the adjustable saddle. This guitar has a good neck angle and a straight neck so the set up is very comfortable for a 12-string, even with barre chords. A great example of affordable vintage, priced way under what a reissue would sell for, should they ever make one. It’s guaranteed to go up as the years pass but unlike a stock or CD,it’s something you can enjoy. Gbase prices for 60’s B-25-12’s, even the trapeze models, are running $1600-$2000 with bad neck angles. This one plays nicely and at $1099, it’s a steal for an early 60’s Gibson acoustic that’s ready to go. Includes aftermarket hardshell case. 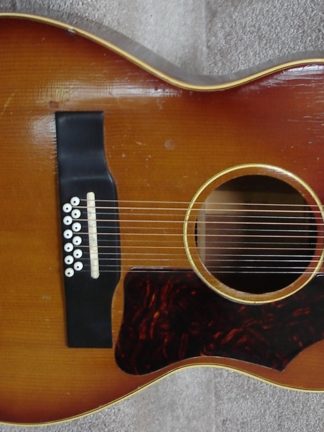