1996 Fender Stratocaster Plus- Sunburst – Rosewood Board

Very nice Plus model in 3-tone sunburst with a rosewood board, for a real vintage vibe that’s straight out of the early 60’s.  The Strat Plus made its debut in 1987 and had a very successful 13-year run, ending in ’99, which was the last year of the American Standard, replaced by the American Series, with the “American Deluxe” replacing the Strat Plus as Fender’s premium production model.  When released in ’87 the Plus was essentially a deluxe model American Standard, with upgraded pickups and hardware.  It featured a trio of the new Lace Sensor pickups, which provided a vintage tone without the annoying noise associated with standard Strat pickups – and no magnetic string pull to kill the sustain of the strings.  The Gold Laces (50’s Strat sound) on this model are the same pickups used on the early Plus models as well as on the Clapton and Buddy Guy signature models; both of whom toured with these stock Laces for many years.  I’m a big fan of these pickups as they’re the best I’ve found for zero hum while retaining that vintage Strat tone.  The Plus also features precision locking tuners and LSR roller nut (or Wilkinson cam nut on early models), enhancements to keep the guitar in tune, especially for players who use the tremolo to great measure.  This one’s in excellent condition overall with the only flaw being some buckle scratches on the back (shown here) in the clear coat only.  Frets are in excellent shape and the set up is spectacular with low action and no choking out on bends.  This one comes with a new Stew-Mac truss rod adjustment tool (shown here) since someone used a wrong size Allen key at some point, but the Stew-Mac tool is beveled and made for this very purpose.  Lettering on the pickups is still in nice shape which usually indicates a guitar hasn’t seen much playing time.  It’s shown without back cover but we’ll install one prior to shipping.  Includes trem arm, springs, and original “Plus” case with deluxe latches and gray interior.  This is a very nice Plus model for $999. 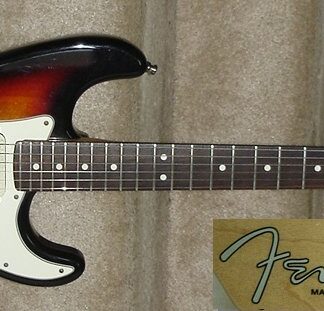 You're viewing: 1996 Fender Stratocaster Plus- Sunburst – Rosewood Board $999.00
Add to cart
Brought to you by WisdmLabs: WordPress Development Experts